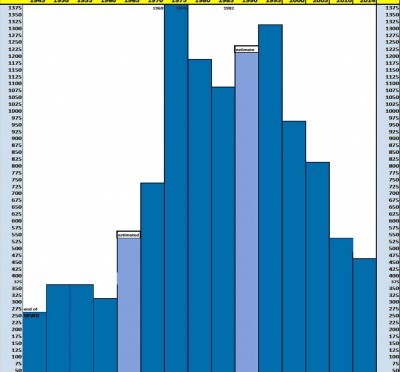 For those of us following the decline in the AKC registrations of Gordon Setters over the past two decades I’ve put together this not very scientific but mostly factual chart<grin> a scientist I’ve never been!  I pulled AKC registration numbers from the history pages of the Look/Lustenberger book “The Complete Gordon Setter” which have allowed me to complete this 70 year view of the size and fluctuation of our Gordon Setter population.

This chart uses 5 year increments to illustrate both the growth from 1945 (post WWII) until 1975 and then the decline that began in the 1990’s. Not listed on this chart is the lowest year in our current decade  2013 with 396 registrations which took us back nearly to the level of 375 dogs in the 1950 the post war era.

Many imported dogs arrived from England in the late 30’s because of the war when  English breeders found themselves unable to maintain the dogs. Much of the breeding here in the states then, as a result of those imports were crosses to the English stock as well as matings of the imported dogs. Remember that in 1939 the American Gordon Setter standard was revised to create a 3″ allowance in height and heavier weights as these English dogs were larger than the American bred Gordon of the time. The accommodation was written into the standard to allow for the increase in size that occurred here in the states as a result of the new imports, obviously our predecessors liked the results they were getting from these matings, and those measurements remain the standard today.

As always, your comments, questions, suggestions and other pertinent stuff like that are welcome in the comment section. Tell us what you’re thinking or if it needs to be done, correct me if I’m misquoting or wrong!