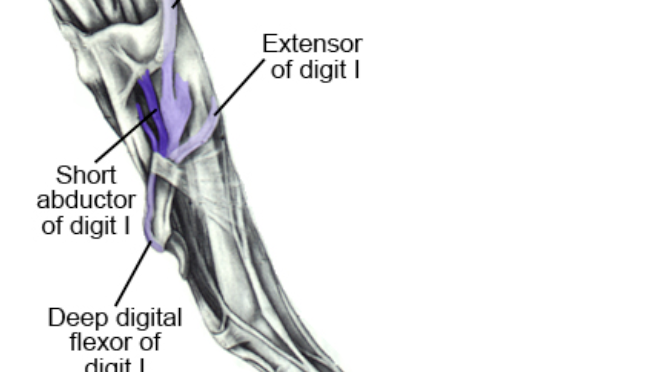 “Do the Dew” …should we or shouldn’t we? M. Christine Zink DVM certainly gives food for thought in her articles, but she’s not talking about that well known bright yellow soft drink, instead she’s talking about dewclaws and the fairly common practice of removing these. Dr. Zink exposes us to her concern about the long term ramifications that may occur from foreleg dewclaw removal, the possibility of injury or disease (carpal arthritis).

Quite frankly I’ve always removed the dewclaws from puppies in my litters, and I haven’t really given much thought to the practice. I’d always been told that the dewclaw served no purpose, and that when working in the field, the dewclaw could be a source of injury if caught on a branch or bramble. So, I simply had them (the dewclaw that is) lopped off at my earliest convenience within a day or so of the puppy’s birth. I do remember being told that it wasn’t a good idea for an amateur like me to nip those claws off myself, as if done wrong, one could damage the tendons in the dog’s foreleg causing lameness or a limp, so I always asked my vet to perform this simple procedure.  Well, those tendons attached to the dewclaw that I just mention, that’s what lead me to share these articles with you today, articles by Dr. Zink that offer a different opinion about the function of the dewclaw and how injury or disease might result from their removal.

M. Christine Zink DVM, PhD, DACVSMR of Johns Hopkins University “When a dog runs, however, the entire foot from the carpus to the toes contacts the ground. If the dog then turns, it can dig the dewclaw (the equivalent of our thumb) into the ground to stabilize the leg and reduce torque on the rest of the leg.”

“Based on stop-action photographs, veterinarian M. Christine Zink of Johns Hopkins University believes that the entire front foot, including the dewclaws, contacts the ground while running. During running, the dewclaw digs into the ground preventing twisting or torque on the rest of the leg. Several tendons connect the front dewclaw to muscles in the lower leg, further demonstrating the front dewclaws’ functionality. There are indications that dogs without dewclaws have more foot injuries and are more prone to arthritis. Zink recommends “for working dogs it is best for the dewclaws not to be amputated. If the dewclaw does suffer a traumatic injury, the problem can be dealt with at that time, including amputation if needed.”[1]

To gain a full understanding of Zink’s position regarding the dewclaw’s purpose and any injury that may result from their removal read through links I’ve provided to her articles. Click the bold type link to open and read each in full. You’ll also find I’ve included a few excerpts if you’re looking for a quick Reader’s Digest version.

“I have seen many dogs now, especially field trial/hunt test and agility dogs, that have had chronic carpal arthritis… Of the over 30 dogs I have seen with carpal arthritis, only one had dewclaws.”
“…there are 5 tendons attached to the dewclaw… at the other end of a tendon is a muscle, and that means that if you cut off the dew claws, there are 5 muscle bundles that will become atrophied from disuse.”
“Those muscles indicate that the dewclaws have a function… to prevent torque on the leg. Each time the foot lands on the ground, particularly when the dog is cantering or galloping the dewclaw is in touch with the ground. If the dog then needs to turn, the dewclaw digs into the ground to support the lower leg and prevent torque. If the dog doesn’t have a dewclaw, the leg twists. A life time of that and the result can be carpal arthritis, or perhaps injuries to other joints, such as the elbow, shoulder and toes.”
“As to the possibility of injuries to dew claws. Most veterinarians will say that such injuries actually are not very common at all.”

I also found this video that may be of interest to you. It illustrates how dogs use their dewclaws on ice.

I haven’t decided whether to make any change to my practice of removing dewclaws. Whether to “do the dew” or not is still in question for me, and I’m not here to give you my advice, or to assert that you change what you do, what I did want was to simply share this information with you and then to ask whether you have any thoughts, questions or practices that you’d like share about dewclaw removal through the comment section?

I did find this funny tidbit on Physchology Today in an article written by Stanley Coren:  “There is an interesting bit of folklore that keeps some people from removing the dewclaws of their dogs. In the southern states in America there is a common belief that dogs that are born with dewclaws on their hind feet (which is somewhat rare) have a natural immunity to the venomous effects of snake bites as long as the dewclaws remain intact. Once, when I was in South Carolina, an old man brought out a favorite hound of his and showed me the dewclaws on her back legs. He explained to me, “She’s been snakebit more’en one time, but she’s still here ‘cause them dewclaws sucked up the poison.”

27 thoughts on “Dewclaws – should we remove them?”