(Editors note: antique print illustrations were added by the publisher for your viewing pleasure and are not intended to illustrate points in the author’s article)

Up to this point, we have only visually examined dogs, much of it from across the ring. Now it’s time to take a closer look.  In this article, I would like us to step to the front.

Imagine yourself looking down at a well groomed and stacked dog before you.  The first aspect you will notice of the Gordon before you is the head.  If you’re like me, you will be immediately drawn to the eyes and expression.  The standard says the eyes are “of fair size, neither too deep-set nor too bulging, dark brown, bright and wise.  The shape is oval rather than round.  The lids are tight.”  Eyes come in all shades of brown.  The darker they are, the more pleasing the expression to most of us.  This is purely esthetic as color of the eye does not affect the dogs ability to function.  However, the prominence of bulging eyes would seem to present an increased possibility of injury in the field and dogs with eye lids that are not “tight” (drooping lower lid with mucous membrane showing) or too deep-set, would leave open the possibility of chaff collecting in the lower lid while the dog is in the field.  Round eyes also can change the dogs expression, but once again, is esthetic only.

The standard also calls for the ears to be “set low on the head approximately on line with the eyes, fairly large and thin, well folded and carried close to the head.  Most breeders will see, from time to time, a dog with shorter, thicker ear leather.  I have one right now and I need to be vigilant about cleaning and caring for her ears because the thickness seems to lend itself to ear infections, especially in hot, humid weather.  These short ears are also not as pleasing to look at, particularly when she chews the hair off!  A high ear set also negatively impacts expression.

The standard goes on to say the skull should be “nicely rounded, good sized, broadest between the ears.  Below and above the eyes is lean and the cheeks as narrow as the leanness of the head allows.  The head should have a clearly indicated stop.”  The skull should broaden out to its widest point at the between the ears but this should be a gradual widening and when viewed from the top, the head should not look like a large slice of pie or a giant wedge of cheese.  This look is often referred to as “wide in the back skull”.

A definite stop between the eyes is ideal, but if it is too deep or severe, it can give the look of a hard expression and not the typical softness desired.

“Muzzle – fairly long and not pointed, either as seen from above or from the side.  The flews are not pendulous.  The muzzle is the same length as the skull from the occiput to stop and the top of the muzzle is parallel to the line of the skull extended.  The lip line from the nose to the flews shows a sharp, well-defined square contour.”  This is easier to visualize if you think of it as a brick on brick look when viewed from the side.   It’s common, but not correct, to see dogs when viewed from the side with the top of the skull level, that will have a muzzle that is not parallel to the top of the skull but instead is pointing slightly downward.  This look is referred to as down faced or it can be said that the dogs head does not have parallel planes. As our dogs get larger, so do heads, and with that seems to go a tendency for pendulous flews.  Many times this occurs in conjunction with seemingly too much skin, including loose lower eye lids and throatiness (extra skin on the neck, under the jaw).  I can cite examples of throaty dogs from the past that didn’t have loose eyes or dogs with loose eyes and pendulous flews that weren’t particularly throaty, but there were far more who carried all three.  A previous edition of our standard referred to houndiness (think Bloodhound here) as being undesirable.   I think it’s wise to remember ideal dogs need to look as though their skin fits like spandex and not sweats.

Our standard describes a bite where the teeth meet in front in a “scissors bite with upper incisors slightly forward of lower incisors.  It also says a “level bite”, where teeth meet evenly in the front, is not to be considered a fault. 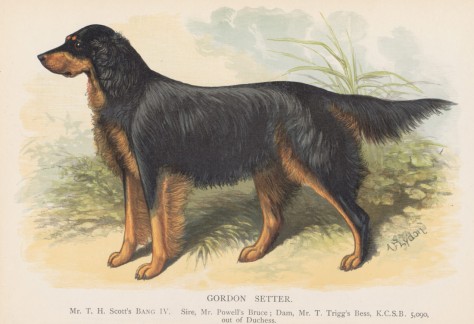 The standard is specific as to color on the face and I won’t go into much detail here except for a couple of points.  Young dogs with mahogany markings tend to darken with age, especially on the face.  This is not a fault, but in my mind, an expectation.  Also, you can often find a young pup with a small stripe of tan over the top of the muzzle at the nose.  This may well disappear or greatly diminish with age and should not be faulted.

As you sit ringside or wander the grooming area, you will see many different heads.  Take note of them.  Notice if the bitches heads look feminine and the boys look masculine.  Notice if the head fits the body.  We often hear “that dog doesn’t have enough head or that bitch looks doggy”.  Is that true or does the head fit the body for that style of dog.   In some lines, young animals gain head and flew with age and in others, the heads are large early and the body needs to grow to fit them.  Typically, heads, and even in some cases, bites, can change until the age of three.  When evaluating an adult, it’s very important to overall balance that a dogs head looks like it’s the one he or she should have for their body type.  Check out the expressions and note the ones you like or dislike and attempt to ascertain what it is about the expression that impacts you.

I have not included photos of heads here because there are many looks that can be considered correct by standard.  It’s important, as breeders, that we take a look around and widen our horizons by taking note occasionally of stock, other than that in our own kennels, and try to develop an appreciation of the efforts of other breeders.  In some lines, it may be the heads that catch your eye and in another, it may be another trait that earns your admiration.  These are all useful bits of information to file away and may lend direction to the search for the best sire for a litter not yet thought of. (editors note; antique prints were added by the publisher for your viewing pleasure and are not intended to illustrate points in the author’s article)