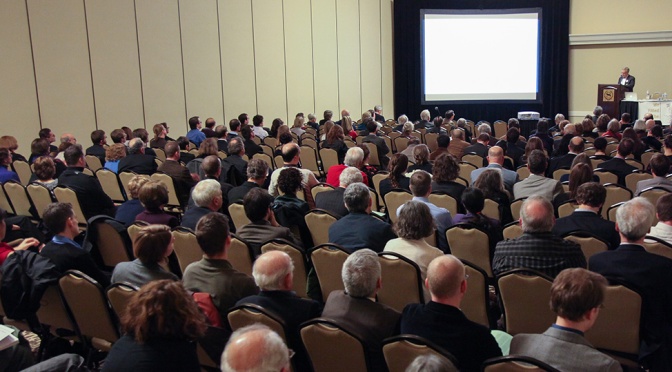 From the February 2014 issue of Dogs in Review magazine.

Ever wonder “what does an AKC Delegate do?”

The delegate is supposed to represent his or her dog club to the AKC, but that’s only half the job. This tongue in cheek essay from Dogs in Review magazine will give you an all around look at the job and bring a few smiles along the way.

From the age of five I have been going to dog shows. Since then, I have organized a university outreach course on canines, served as president of an all-breed club and of the Clumber Spaniel Club of America, and been show chair, but until I became the AKC Delegate for my local all-breed club 12 years ago, I didn’t really have a clue as to what that really meant. So I thought it might be of interest to others in the dog world to try to explain what it’s all about, with the good and the bad.

There are about 5,000 AKC kennel clubs in the United States, of which only about 600 are official member clubs, entitled to elect a delegate, and thus supposedly have a voice in the organized dog world. The other kennel clubs are simply licensed to give shows, etc., but are not represented. It’s a big deal to be a member club and involves fulfilling a number of requirements (mainly size, continuity, breeding and shows). The Clumber Spaniel Club of America was founded in 1972, and it took us 17 years and a lot of paperwork to finally be approved in 1989.

The delegate is supposed to represent his or her dog club to the AKC, but that’s only half the job. The other half is to represent the AKC to one’s club, and given the present AKC, that’s not always a pleasing task. About 80 percent of delegates serve long-term and can help serve as informal institutional memory. The delegate is expected to give regular reports on official (and unofficial!) AKC doings. How do we know what to report? As many as two emails come each day with what AKC wants us to know. Also there is an online magazine by delegates for delegates. To learn what AKC doesn’t want us to know, delegates get to meetings early and stay late, and listen to the “old-timers” with 20 or more years as delegate.

But WARNING! It takes essentially three elements to be a delegate: a passion for dogs, plus time and money. The passion for dogs is probably what we share the most. Time available varies with each of us, but money is something else. It’s not cheap being a delegate. In addition to airfare, hotels and meals, there are the two days off one’s job, kenneling, gas, airport parking, van to the hotel and other travel expenses. Most clubs contribute $200 to $250 per meeting, which is at best one-third of the actual costs. Very few clubs pay all delegate expenses, and some delegates pay all expenses themselves so as not to be a burden on the club’s precarious finances. But as the old joke goes, you can actually get rich being a delegate! It takes a good thumb, a bag of cheap peanut butter sandwiches and a good supply of old newspapers. The thumb is for hitchhiking cross-country, the sandwiches for food and the newspapers for warmth at night sleeping on a park bench. Then you invest the money your club gives you and get rich!

There are four meetings a year, all on the Atlantic coast. You probably think AKC stands for American Kennel Club; in my opinion, it stands for Atlantic Kennel Club. There are executive offices in New York City, operational offices in Raleigh, North Carolina, and meetings held in New Jersey, North Carolina and Florida. So reflect on that, especially if you live in Kansas, not to mention California, Oregon, Washington, Alaska or Hawaii! Another problem: Some parent clubs schedule the national at exactly the same time as the important election meeting in March.

Once elected and having gone through the 3-month AKC approval process, you go to your first meeting. (One can represent only one AKC club at a time, and when I was elected delegate for the CSCA, having already served as a delegate for my all-breed club for 12 years cut no ice.) If this is really your first meeting, it looks like organized chaos. There are about 400 of the 600 delegates typically present at a given meeting. All are running around in the same big hotel, attending myriad committee meetings and one huge general meeting. It’s so bad that at your first meeting they hang a sign around your neck that says, “FIRST MEETING,” so people will take pity on you. And you are assigned an official mentor, normally someone in your breed. Meetings are rife with unwritten rules, dress codes, etc. Also you have to be formally introduced on the floor at your first general assembly meeting with a résumé of your dog activities, normally by someone in your breed.

Meetings are held on Mondays and Tuesdays (helps keep out the working stiffs!). On Monday there are individual committee meetings (e.g., parent clubs, all-breed clubs, canine health, dog show rules, obedience, herding, coursing and so on). Many take place at the same time, so you have to choose. Each committee has an elected board. To be elected, one presents an unblemished attendance record for hopefully 200 years and great dog activity. The committee board members sit at the head of the room and officiate. Any delegate can attend any committee meeting but can be heard only after the board members have had their say concerning the agenda. At the end of this first day there is a big general meeting with no agenda, so anything worrying people can be brought up and discussed. None of the professional staff are to attend these Monday meetings, except by special invitation. It’s just delegates talking to delegates. Monday evening is a cocktail party, and later it’s a good time, especially for people in the same breed, to have dinner together and talk dogs.

On Tuesday there is a complimentary continental breakfast, standing, followed by some sort of informational presentation organized by the professional staff, and then the very formal official general assembly meeting in a huge ballroom (where there are never enough chairs). Presiding is CEO Dennis Sprung with reports from the AKC Treasurer and other officers. There are microphones around the room, and new delegates are formally introduced. The agenda is sent out far in advance, with proposed rule changes. Any new member clubs, after having been cleared by the professional staff, are voted in. There are matters such as inevitable new Beagle trial details. (Afterwards, in the men’s room, one guy will ask, “Does anyone understand what the heck we just voted on with Beagle trials?” We all agree we don’t have a clue, but everyone likes Beagles, and if that’s what the Beagle people want…)

Next we all adjourn to a large dining room for a nice luncheon, compliments of the AKC. This is a good time to meet other committed dog people, but the conversations are soon interrupted by Dennis tapping on a glass and endless awards, interspersed with dutiful clapping. Then unless any items on the morning’s agenda still remain, we turn in our badges and go our separate ways.

References for more information on the Delegate role visit the AKC website by clicking the link below.

The American Kennel Club is a “club of clubs”, and not a club of individuals. There are over 500 clubs that meet AKC membership requirements and have duly elected or appointed Delegates to represent them at quarterly meetings of the Delegate Body. Each delegate functions as a representatives of his or her member club in voting on matters coming before the Delegate Body and electing from amongst their membership the thirteen individuals who serve on AKC’s Board of Directors. Under the Constitution and Bylaws of The American Kennel Club, the Delegate Body”… shall have sole power to make the Rules governing dog shows and field trials and the clubs or associations formed to conduct them.”

One thought on “On Being an AKC Delegate”