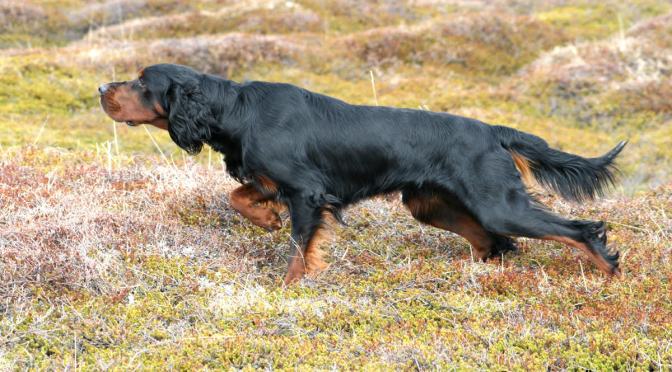 Why do I have pictures of an English Setter and a Pointer in my article about Gordon Setters?  Good question.  They are here so we can discuss how angles function and their importance to breed type.

The other part of the front angle, the upper arm, may also add a little more reach, but its primary importance in the setter is the flexibility it adds to the front allowing the Setter to “set” rather than point with the more upright stance of the pointer.  I chose to use the English Setter to demonstrate this because the photo was not only incredibly good, but the coloring of the white dog made it easier to see.   Compare the English Setter to the photo of the Pointer, who is also pointing, and notice the structural difference of the front assembly.  This length of upper arm is very important to breed type.  It’s the major structural characteristic that separates the setters from the pointers and in these days of declining numbers of Gordon Setters, care must be taken so we don’t loose this as its already hard to find.

Rear angulation is the easiest to see and assess.  The standard says “The hind legs from hip to hock are long, flat and muscular; from hock to heel, short and strong.  The stifle and hock joints are well bent and not turned either in or out.  When the dog is standing with the rear pastern perpendicular to the ground, the thigh bone hangs downward parallel to an imaginary line drawn upward from the hock.”  The impression you should have, when viewing a correct rear from the side, is one of power and flexibility.  It should be able to reach far forward and drive far back to help propel the dog.  Note the photo of the Gordon.  Look at the length of the upper arm and also the flexibility the angle allows in the rear.  Maximum angle and balance from front to rear would allow this dog to “set”.

We’ve talked about correct angles but I would be remiss if I didn’t add a bit about balance.  When visualizing a relatively square, short backed dog, imagine for a moment how this dog would move if he had more angle in the front than the rear or more in the rear than the front.  Somehow, that dog would have to compensate for his unbalanced angles when moving. We will talk more about the impact on movement later, but for the sake of function, balance, regardless of angle, is most important.  However, to have a truly good specimen of the breed, we must strive for correct, balanced angles and we must be striving to keep correct upper arm.

Angulation serves another very important function.  From “a slight spring” of the pastern through the correct series of angles, our dogs are equipped with a remarkable set of shock absorbers.  These angles absorb the pounding and stress of hard work and allow this heavy boned, muscular dog to put in a full day in the field.  A dog so endowed should not tire easily, provided he is fit.  This, along with the ability to set, are examples of where form meets function and that is indeed breed type.

I would like to thank Oddur Orvar Magnusson for the use of the photographs of the English Setter, “Erro”, and the Gordon Setter.  I would encourage you to take a look at his videos (English Setter Iceland) on You Tube.  They are amazing examples of English Setters, and an occasional Gordon, doing what they were bred to do.  They will do a wonderful job of demonstrating the impact of angles on Setters.

Also thank you to Kevin and Samantha Freeburn for the photo of the pointer, “Drake”, Quail Hollow Genesis, JH.  In my opinion, these photos have created great visuals for learning purposes.