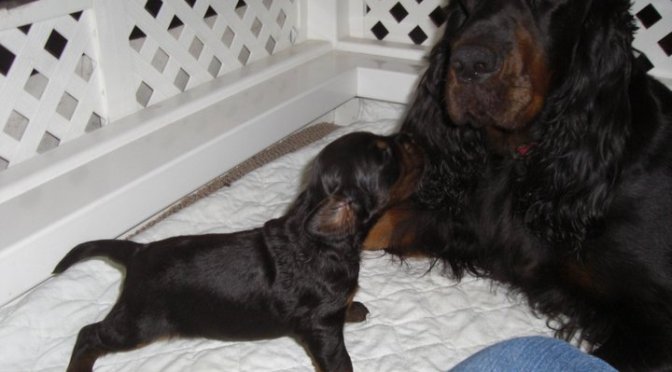 Not going to mince words here people, getting yourself set up with the right whelping box and puppy pen layout for that litter of Gordon Setter pups is as important as finding the right mattress for a good night’s sleep. Yes, you could choose to use a kiddie wading pool for whelping, or you could also build a basic wooden box. Both of these will hold the pups while they are small, still dragging themselves around on their bellies, but there are so very many other things to consider in order to safely contain the bitch and her puppies, that I would be doing you a huge disfavor if I were to say that a basic box or kiddie pool were all you needed.

The best thing, will be for you to design your whelping box to fit your bitch and your available space, while designing your entire set up so that it will also to fit the growing and changing needs of the litter and dam over the next couple of months. There are a quite a few things to consider as you set up for your litter, let’s go through a list of them so you can design your whelping box and your puppy space to fit that litter from birth until they leave for their new homes.

Whelping Box Dimensions – ideally the box should be at least a foot longer than the bitch is long when measured from nose to rear. For most Gordon Setter bitches that would be about 5 feet long (60″) on at least one side. The box can be built 5 foot square or if you wish or you could build the box rectangular instead at 4 feet (48″) wide. A box that is too large could mean the newborn puppies might get lost, unable to find their way to mom; and a box built to small increases the odds of the bitch lying or stepping on a wee one.

Side Height – the height of the side wall is most effective when it is designed to be adjustable, so more height can be added when the pups begin to walk and climb out of the box. I like my box to be about 12″ for the first 3 weeks or so, as this allows for me to sit next to the box while reaching in to play with or pet mom and pups. Once the pups reach the age where they can climb out over the sides we want to be able to add at least another 12″ of height to the existing wall.

Floor – Whether you want or need a floor in your box will depend on the floor surface where you are whelping the litter. I whelped my litters in my basement, and while these were clean, dry cement floors in newer homes, the floors were also cold to the touch depending on the season. So, I had my whelping boxes built with a raised wooden floor that sat about 2″ off the ground to keep the pups off the cement floor and away from that chill. I often added a sheet of Styrofoam insulation under the floor of the whelping box as well for added protection from cool drafts and chilling.

Puppy Rails – you’ll want to install a rail (sometimes called a pig rail by farmers) around the inside edge of the whelping box approximately 5 inches or more off the floor to keep the bitch from smashing a puppy between her body and the wall causing suffocation. There’s a number of photos and instructions on the web about how to make this work and you’ll find those instructions in the links at the end of this article.

Convenient and quiet – where ever you decide to whelp and raise your litter, make it in a convenient place for you to be able to monitor the bitch and the puppies. I recommend whelping puppies inside the house, and as the whelping itself can take a long time and often seems to happen at night, having a couch or lounge chair nearby for cat naps is high on my priority list! I’ve known breeders to whelp puppies in a kitchen, living room, bedroom, laundry room, basement, or an attached garage. Ideally, the location should be quiet with the least amount of family activity. If you have lots of family members or small children, probably the basement, laundry room or garage is best. Bitches with newborn puppies can be very temperamental, protective and are easily disturbed. Giving the bitch a quiet and secluded place to nest with her puppies is going to simplify many things for you and for her. Too many visitors, too many noises and distractions can turn a great mother into a nightmare mom, don’t throw your bitch off her game, give her seclusion with her babies.

Temperature – you will need to be able to control the temperature of the whelping room or at the very least, the whelping box itself, as the biggest threat to newborn puppies is chilling. A draft free room, away from frequently opened doors and windows during cool weather is a good start. A heat lamp that can be raised or lowered to adjust the temperature for warmth should be placed strategically in one corner of the whelping box. I strongly urge you to use either a heat lamp or a puppy heating pad as opposed to heating the entire room (and subsequently the dam) to keep the puppies from chilling. I always keep a thermometer fastened securely to the whelping box and near the floor under the heat lamp so I can monitor that the area is warm enough to prevent the puppies from chilling but not overheating. I’ve always preferred the heat lamp to a heating pad as I’m paranoid that the bitch will chew the electrical cord on the heating pad where with using the heat lamp and hanging it down from the ceiling the cord can be kept out of her reach. Both options are viable and a matter of personal preference.

Mom’s Care and Exercise – in the beginning it’s often nearly impossible to entice Mom to leave her new pups to eat and go outside for potty breaks. You’re going to want to confine mom in an area with the pups and whelping box, possibly with an ex-pen, where if she were to have an accident indoors it can be easily cleaned and she doesn’t potty in the whelping box itself. Diarrhea following delivery is common, especially if the bitch eats placenta during the birth process. She’ll need a space outside the whelping box where she can get away from the pups when she needs to do so, and she will need constant access to fresh water. Additionally, the bitch will have a vaginal discharge following delivery, sometimes this is heavy and often it is messy. You’ll want to consider that as you plan how you will move her from the whelping area to go outside for potty breaks.

Expansion needs – Puppies grow, and before you know it they’re climbing over the walls of the whelping box to explore the great beyond. Now’s the time when Mom’s weaning them and you’ve taken over chow time. Once this process begins, Mom stops wiping their little butts and cleaning up after them so – well – poop begins to happen! This means stinky smell happens, and if you’re not prepared to expand their space fast enough you’ll have stinky, dirty puppies too. Around 21-27 days of age, caring for Gordon Setter puppies becomes a challenge, and you need to have a plan ready to enact for how you will handle the much-needed expansion. Options at this time are either an indoor, or an indoor/outdoor set up. Unless you live in a temperate climate, you like me, will most often be raising those puppies completely indoors with a trips outside to play when the weather permits. This is where a weaning pen comes in.

As the puppies grow, having a much larger place for the puppies to roam and play is important for muscle development and socialization skills. Puppies kept in a small whelping box until they are 8 weeks old will have poorer muscle development, could have coordination problems, and be socially delayed compared to pups who are allowed to run, play, and explore both inside and outside. People socialization is extremely important between 4 to 8 weeks of age for Gordon Setter puppies, so spending as much time with them as you can both inside and outside is critical, as are inviting neighbors and friends by to visit with them. This is the time when your puppies need to be introduced to as many sights, sounds and smells as you can safely find for them, so be sure to enlarge their world to include time outside the weaning pen too.

Listed below are some websites I’d found for you that offer pre-built plastic whelping boxes and whelping supplies including the fleece whelping box pads we talked about. In addition I found a couple of sites with whelping box plans to give you a variety of things to look at as you decide what it is that you want to include in your set up.

If you already have some awesome ideas, techniques or items that you use in your Whelping Setup please share them with us by using the comment section below.

Click any of these links to view products such as or whelping box plans:

How to Build a Whelping Box (WC Rotts – rottweiler breeder)