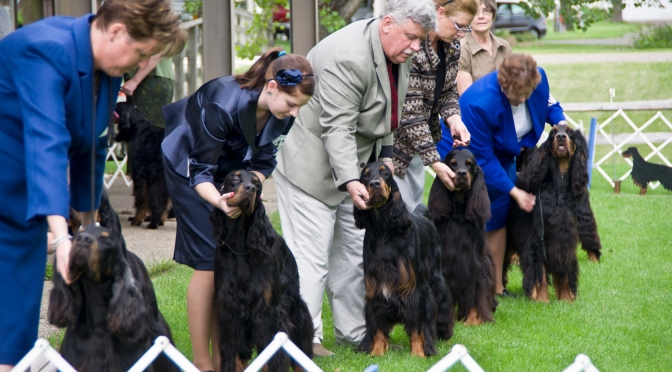 As you will recall, with the last article, we were standing at the front of the dog and examining the head.  Now it’s time to put our hands on his body to see if what our eyes have been telling us about him is really what he is.  Imagine a beautifully manicured and sculpted specials dog, perfectly stacked, in glorious flowing coat.  When we viewed him from the side, he appeared to have lots of forechest.  Now we’ll see if it’s an illusion of skillful grooming or if it’s the real deal.  We will not be fooled!

Begin by running your hand from below the throat, down the front of the dog and between his front legs.  Note the pro-sternum.  It’s the prominent bump at the midline of the chest.  It’s the foremost point of the dogs body.  When viewed from the side, you will note that it arises at a level with, or slightly below, the point of juncture of the upper arm and the shoulder blade.  The standard says “Chest deep and not broad in front; the ribs well sprung, leaving plenty of lung room.  The chest reaches the elbows. A pronounced forechest is in evidence.”  The chest is an extension of the dogs body.  As you run your hand over this area, it should feel well developed and filled in, rather than as a hollow space between his front legs.  With your eyes, examine the dogs front feet.  Are they pointing straight ahead?  Is the handler having difficulty correctly stacking the front or is the dog having trouble maintaining that stack comfortably?  If the feet are pointing forward, and the dog is not toeing out, do the front feet appear to be rolling outward so the dog seems to be standing on the outside of his feet.  These are dead giveaways that all is not right with the front.  Most often this is caused by an underdeveloped chest, lack in depth of body or lack of spring of rib.  If the dog had these things, they would push the elbows outward and away from the body, so the front feet would be in proper alignment.  I should note here that this is not to be confused with the natural tendency of dogs, in a relaxed position, to toe out slightly.  Most will do this and, by itself, should not be cause for concern, though we would prefer not to show it to the judge in the ring.  Many puppies also go through developmental stages where this is common.

Put your hand on the dogs body directly behind the elbow and note the depth of body.  The body, or brisket, should reach the elbow.  In practice, I’ve know some Gordons where the depth of body actually extended a little beyond the elbow.  Next, run your hand along the upper arm and the shoulder blade.  Is there approximately equal length from the point of the upper arm, down to the back of the elbow and from, once again, the point of the upper arm to the shoulder, to create the “90 degree angle” called for in the standard?  If you have these things, this dog will stand, when correctly stacked, with his front legs under his withers.  Imagine him, for a moment, without all the coat.  Let’s say you found that proper, well developed forechest and this dog has the correct front angles.  Because of these things, a “pronounced forechest will be in evidence”.  You felt it and if he didn’t have the coat, you could easily see it.  Given his angles, and substance, it will appear to be greater than that of the pointer.  In practice, and for the purpose of discussion, these aspects are often collectively referred to as the front piece and assessed as a unit rather than separately as forequarters and chest.  All the individual pieces are interrelated and responsible for how the front assembly functions.

Now, let’s turn our attention to the top line.  Step away from the dog and position yourself a few feet away, looking squarely at his profile.  Spend a minute or two assessing him.  Note his neck, “long, lean and arched to the head”.  If he is short on neck or his neck does not flow seamlessly into the topline (back) there is a problem with the shoulder.  Is the topline “moderately sloping” to the tail?  The standard calls for the loin to be “short and broad and not arched”.  The line from withers to croup should be solid, flat and straight. The standard calls for the croup to be nearly flat, with only a slight slope to the tailhead”.  The tail is an extension of the back. The standard says ” short and not reaching below the hocks”.  Notice the length of body.  The standard says the body should be “short from shoulder to hips”.  We are looking for a dog who appears to be about as long as he is tall.  At this point I will caution you not to let your eye wander to his rear extension.  On a well angulated dog, there is a tendency to be fooled on body length by what’s behind him and how far his handler has stretched his rear.  Look only at his height and his back to determine length of back.

So why is the topline so important?  Years ago, I attended a seminar given by Dr. Quentin Laham.  He was an expert on canine structure and movement.  He always brought with him a skeleton of his German Shepherd, who he maintained, when he was alive, was an excellent example of his breed.  In Dr Laham’s opinion, the back was the foundation on which the rest of canine structure was built, and I believe he was right.  Without soundness, our dogs cannot do the job they were bred to do.  With long backs, you can see toplines sag over time.  There is a natural dip in the center of the back which is the area affected.  There are exceptions to this though and I’ve known a few.  I’ve also known of many where this scenario played out and was indeed the case.  Short backs tend to be strong backs.  If you look at the skeletal photo provided in one of the early articles, you can see the natural dip followed by a rise and slight arch of the lumbar vertebrae over the loin.  The dip provides the dog with flexibility of the back for movement.  You can imagine how this is used if you think of the dog at a full gallop.  This area of the back and the loin are covered with muscle in a sound, fit and fully mature specimen of the breed, which lends itself to the flawless topline we are looking for.

The tail should be straight.  I believe an older version of the standard made reference to “collie tails”.  Obviously we’ve made improvements because I haven’t seen one in years, but they are still back there.  We used to see more long tails and they were most generally found on long backed dogs.  The standard calls for the tail to “not be docked, thick at the root and finishing in a fine point”.  It’s common to dock the tip of the tail of a puppy born with a kink.  This can be done for aesthetic reasons or for the health of the puppy because, in the case of a tight kink, it can leave the pup open to skin infections at the site.  A judge running his hand down the tail and measuring it against the hock can easily tell the “fine point” is not there if the tail is docked.  We will talk more about tail carriage when movement is discussed in the future.  Of note to exhibitors, Gordon tails are to carried “horizontal or nearly so”, so when hand stacking your dog, keep this in mind.  This was definitely something I needed to work on!

I hope many of you are heading to Ohio for the National.  Please make note of our GSCA Breeder Education “Hands On” at the show site to be held Wednesday May 11, exact time to be determined.  We will be going over dogs and critiquing for positive attributes only.  Also, at various times throughout the National  and during  the Hands on Program we’ll be measuring heights and comparing to weight for our “My Genes Fit” program demonstrating the variance in size that is correct in the Gordon Setter breed. Bring your dogs by to participate and earn your dog’s fabulous My Genes Fit tags.

We invite everyone to drop by and bring a dog if you have one.  See you in Ohio!

Please note: The photos in this article are provided for your viewing pleasure and are not intended to illustrate any fault mentioned in the article.