In 2015 the number of AKC registered Gordon Setters continued it’s 20 year drop, down by another sixty dogs. Is there any end in sight to this trend, and are we seeing the first signs of extinction for some purebreds, including our own breed? In the last 20 years the Gordon Setter population has dropped by 71%. What is the impact to a breed like ours when 71% of their population is no longer available for breeding?

Could this mean that the breed is in an even more precarious and vulnerable position in the U.S.?

With this alarming decline in the breed’s population, if you’re breeding Gordon Setters there are a few things to consider as you go about planning new litters, and one of those considerations includes the need to develop a good understanding the of the gene pool and how your choices will impact preservation of the breed.

Your next litter is like a big fish in a small pond. As there fewer and fewer Gordon Setters whelped each year, the overall number of Gordon Setters available for breeding is dropping to an all time low, so litters that are born now will have a bigger impact on the future and preservation of the breed than the many litters that were born 20 years ago. Is it possible that we are losing genetic diversity in our breed population due to the decline in the overall number of new litters produced, and that our gene pool might also be shrinking? Unfortunately that answer may be Yes.

As breeders then, we need to ensure we have a basic understanding of genetic concepts and what it means to maintain genetic diversity. As our pool of fertile dogs continues to decline in number, the chance of finding unrelated genetically diverse dogs has fallen dramatically, which becomes especially relevant if we later find we need those dogs to help resolve a health issue from a newly recognized gene mutation.

Just as we pay attention to the need for health clearances when preparing for a litter, so too must we pay similar attention to understanding and analyzing the pedigrees of the resulting litter. Now is the time when we need to embrace the concept of preserving  offspring from the bloodlines of many various kennels and engage in preserving semen from healthy dogs of good quality, preserving many dogs of good quality from both show and field, not only those who are our top winners. Should we be doing more and more blending of the typical show and the field lines, or importing semen or dogs from other countries? These tactics and many more, now more than ever before need our attention, as breeders work to preserve the best qualities of our gorgeous breed, along with the diversity in our gene pool needed to safely continue the Gordon Setter in a healthy state.

With all that said, the following is an excellent article to get you started from The Institute of Canine Biology. It is a basic discussion about the gene pool. Today’s “Required Reading” for every Gordon Setter breeder I do believe!

The Institute of Canine Biology

What’s in the Gene Pool?

The founding of the breed – the Gene Pool 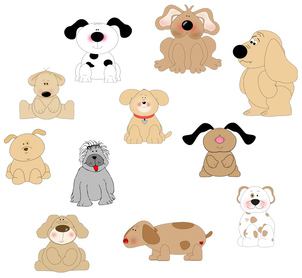 Let’s pretend these 11 dogs are the “founders” of your breed – they are the first dogs entered into the studbook.  All subsequent members of the breed are descended from these dogs only.  The breed has a closed gene pool.

All of the genetic variability that will ever exist in your new breed is present in these dogs.  Mutations probably won’t add new, useful genetic variation because most mutations are detrimental.  If the mutated gene is dominant and detrimental, it will likely be weeded out very quickly.  If the mutation is recessive, it is not expressed unless an animal is homozygous for the allele by inheriting a copy from each of its parents.  In the heterozygote condition, a mutated recessive allele can lurk in the genome for generations without ever causing a problem.  So, unless additional “founders” are added to the population at a later date, all of the genes you will ever have to work with in your breeding program are present in these dogs.

In each of these dogs there are at least a few (and perhaps many) recessive genes that could cause genetic disorders.  But these disorders will only expressed if a dog is homozygous for the disease allele – it must have TWO copies, one from each parent.  As long as the disease genes are rare in the population, very few animals will ever display the illness.

Can the gene pool get bigger? (No!)

Okay, starting with your 11 founder dogs, let’s let them reproduce.  To keep it simple, we will let them produce only identical copies of themselves – clones.

Now we have 27 dogs, all of which are exact copies of one of the founders.  What has happened to the size of the gene pool?

You now have more dogs, and you now have more copies of the genes found in the dogs that had more offspring, like that busy gray dog with the red tongue.  So, the frequency of particular alleles is different in this population than in the founders, but the number of different alleles in the population is exactly the same.  (We’re ignoring the possibility of a mutation for now.)

What if the dogs reproduce normally instead of producing clones?  In sexual reproduction, each puppy receives one set of genes from each parent.  And, each puppy receives a different mix of parental genes, so each one is a bit different.  Also, each parent dog has a different number of offspring and might mate multiple times with different dogs.  So the frequency of the various alleles in the population could be very different in this new population than in the founders.

But again, even though there are now more dogs in the population, the gene pool does not get bigger.

In fact, it doesn’t matter how large this breed gets – it might someday grow to thousands of dogs – but as long as the stud book is closed, the gene pool will never be larger than it was when the breed is founded.

Can the gene pool get smaller?  (Yes!)

The gene pool of a closed breed can never get bigger.  But it can get smaller.

What if dogs with black ears were less fertile, or had higher puppy mortality, or had some other biological problem?  The frequency in the population of the genes causing the black ears would be reduced by natural selection – black-eared dogs would contribute fewer copies of their genes to the next generation. Eventually, by genetic drift (chance) or natural selection, the genes in black-eared dogs would become rarer and rarer, and might eventually be eliminated from the population entirely.

What if breeders didn’t like black ears, so all the puppies with black ears were spayed or neutered and sent to pet homes?  Those alleles will become less frequent in the population, and they might be eliminated completely because of artificial selection courtesy of the breeder.

The gene pool gets smaller when genes are completely eliminated from the population.  It is unlikely that a gene will be restored by chance mutation, and the only other way it can be restored is if an animal is introduced into the breeding population that carries that gene and who reproduces successfully.

In purebred dogs, when the stud book is closed, no new alleles can be introduced into the breed.  The loss of an allele is permanent and reduces the heterozygosity in the genome for that gene.